The Surly Guide to the Minnesota State Fair

There are very few Minnesota institutions like the State Fair. You know how there are multiple Paul Bunyan statues here and people have hard opinions about which is the best one? This is like 12 days of that particularly regional pride, manifested in deep fryers, Holsteins, and free lip balm from the local paper.

Now, does it go as hard as Texas’ fair? Well, we’ve never had a giant cowboy Wicker Man at the entrance, but we do alright.

We compiled some of our favorite features and aspects of the fair with the help of Tiffany Jackson, Surly’s in-house Fair Expert. We also run down where you can find our beers (including three that were brewed for the occasion) and other Surly-related activities on the fairgrounds. Fasten this guide to a stick for the true fair experience.

THE GATHERING OF THE BRAS: If you hop on the Skyglider, you may well see a smattering of discarded bras on the roof of one of the buildings. They’ve clearly been dropped from the glider cars, along with the occasional flip-flop. We don’t judge. It gets hot sometimes and comfort is critical if you’re going to house cookies and French fries in the late-summer heat.

THE GOOD BATHROOMS: Jackson recommends the trailer behind O’Gara’s and over at the West End Market behind Lulu’s Public House. Clean, spacious, and well-appointed.

GAELIC DARK & STORMY: Speaking of O’Gara’s, that’s where you can find this deep golden ale inspired by the classic cocktail, brewed with heaps of lime and ginger.

FREE MUSIC: Everyone knows about the Grandstand acts, but you’re doing yourself a disservice if you don’t enjoy the many, many free shows you can find in every possible genre–rock, country, jazz, folk, gospel, hip-hop, an unreasonable amount of polka, and at least one superlative Tom Petty cover band named after a Velvet Underground song.

WATCHING LOCAL CELEBRITIES DO THEIR JOBS: Have you ever wanted to see Jason DeRusha read the news outside? Or Sven Sundgaard tell you it’s going to be muggy this weekend in person? Then brother have we got a fair for you. All our local media outlets have booths and bleachers that allow you to interact with your favorite personalities, or just give Meatsauce from KFAN the finger (don’t actually do that, he’s a good guy). The awkward transition from a segment on adorable baby goats at the 4-H Building to breaking news on the worst industrial chemical fire in Moorhead history is worth the price of admission.

WHERE YOU CAN FIND US ON TV: We’ll be on WCCO Monday morning with MN United, KARE on Monday afternoon to talk beer, and back on WCCO Tuesday PM to discuss Pulling Together.

THE KLOSER: If you couldn’t get to Target Field in April, you probably missed out on Kut Down, Surly’s Opening Day collaboration with former Twins great/homebrewer Glen Perkins. The enthusiastic response made it a no-brainer to invite him back for another swing. The Kloser is an American IPA with notes of citrus, grass, and pine, and you can find it at the Ball Park Café. Glen and roughly half our brewery will be at the Fair on Tuesday, August 28th, and he’ll join Head Brewer Ben Smith to chat about it with WCCO that afternoon. Check your local listings, as they say.

CROP ART AND SCARECROWS: If you ever want to see a Daryl Hall portrait crafted out of multicolor oats, this is your chance. There’s also a Babadook scarecrow this year, so enjoy the nightmare fuel you dumb birds.

Babadook scarecrow in the books pic.twitter.com/Y8eye2ig8c

THE MIRACLE OF BIRTH CENTER: See if you can tell the difference between country kids and city kids leaving this building. The country kids will be jaded and looking for the Giant Slide. The city kids will be somewhere between traumatized and gazing in wonder at their moms, with a stray “what the hell, dude” look at their dads.

MACHINERY HILL: Gawk at row upon gleaming row of tractors and other farm implements. Your uncle from Lake Benton might get starry-eyed looking at an S790 John Deere combine, but if the farm life isn’t for you, “There are a ton of good dogs over there, too,” says Jackson.

HOW THE SAUSAGE IS MADE: Chef Ben Peine will be at the Creative Activities Building’s new Cambria Kitchen on Thursday, August 30th, demonstrating how Surly makes its in-house boar bratwurst for the Beer Hall. He’s bringing his own extruder, so don’t think for one minute that this is some kind of game.

YE OLDE MILL: “It’s over 100 years old and I’m pretty sure it’s haunted,” says Jackson. “There are elves playing a piccolo inside.” So. Metal.

ALL THE PLACES YOU CAN GET SURLY: In addition to the three State Fair beers above, we’re bringing what brewing industry experts call “a crap-ton” of other fine Surly wares to the fair. Tanner from work made the map below for you to use at your leisure. Have a great time! 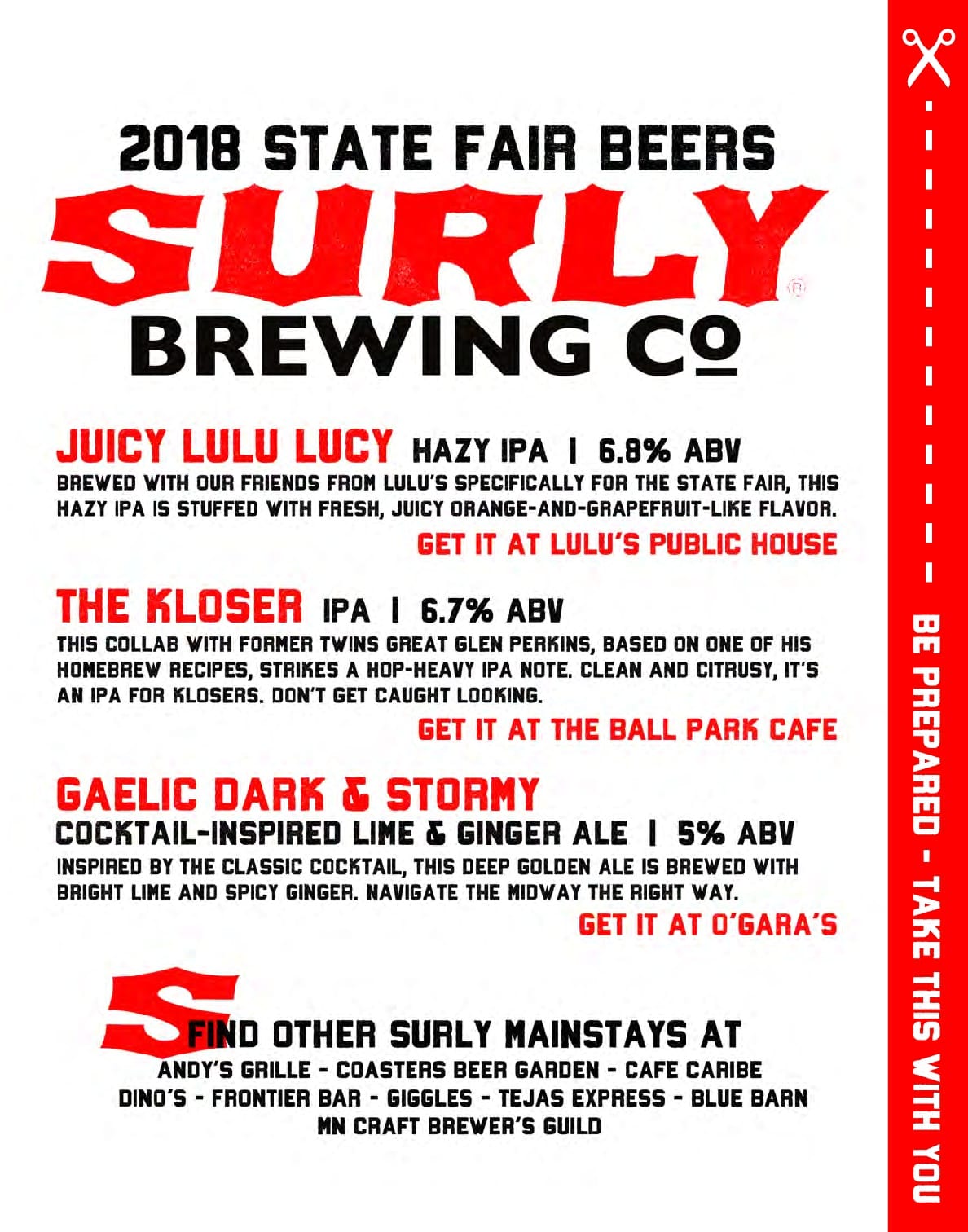