Barrel-Aged Oat Wine, or BAOW, is an updated take on an old favorite. Roughly based on the recipe for Surly Eight, BAOW adds some tweaks and a hell of a lot of oats for a highly drinkable beer that still packs a punch. We turn the floor over to Surly Head Brewer Ben Smith for more intel on our newest release.

Is Surly Eight a major influence, or more of a launching point to a pretty different thing?

“Surly Eight was a definite influence for this beer, but we wanted to revisit the style with some tweaks to make the beer a bit more approachable. BAOW drinks surprisingly smooth for a higher-ABV, barrel-aged beer. It has wonderful notes of vanilla, marshmallow, and citrus with a light, silky-smooth mouthfeel from the oats. You get more booze/rye on the aroma than in the beer, which I appreciate – some spirit barrel-aged beers are all booze, with no real complexity in the drinking experience. Here, I find you get a lot of malt and oat flavor and nice subtleties from the spirits/wood, without overwhelming the base beer. If I wanted to drink whiskey, I’d just drink whiskey.”

What is oat wine? Is it similar to a barleywine? And why isn’t it called beer?

“An oat wine is a beer that uses a large amount of oats in the mash with an elevated alcohol content. The drinking experience is much more aligned with drinking wine or spirits as you tend to sip and cherish the beer over a prolonged session, versus an IPA or Pilsner which you’re drinking relatively quickly and in multiples. It is similar to a barleywine, just more oats!”

“Using oats processed in three different ways adds to the complexity of the beer. Simpsons’ Golden Naked Oats impart a nutty, almost candy-bar flavor as well as a wonderful orange color to the beer. Malted oats have a huge, thick husks which help with liquid-solid separation during lautering and a rich, creamy cereal flavor. Flaked oats add an oatmeal flavor. Combined, all three work together to increase foam creation and retention, an increase in body and a very unique, silky-smooth mouthfeel.”

Is the barrel character similar to our Darkness or Pentagram beers?

“It’s subtler. With this beer I was looking more for subtle vanilla, marshmallow flavors in addition to the oak and rye flavors to complement the already complex nature of an oat wine. I find it very balanced and approachable for a barrel-aged beer.”

BAOW is available now. The rhyme is unintentional, and we regret this. Please enjoy the secret origin story of BAOW below. 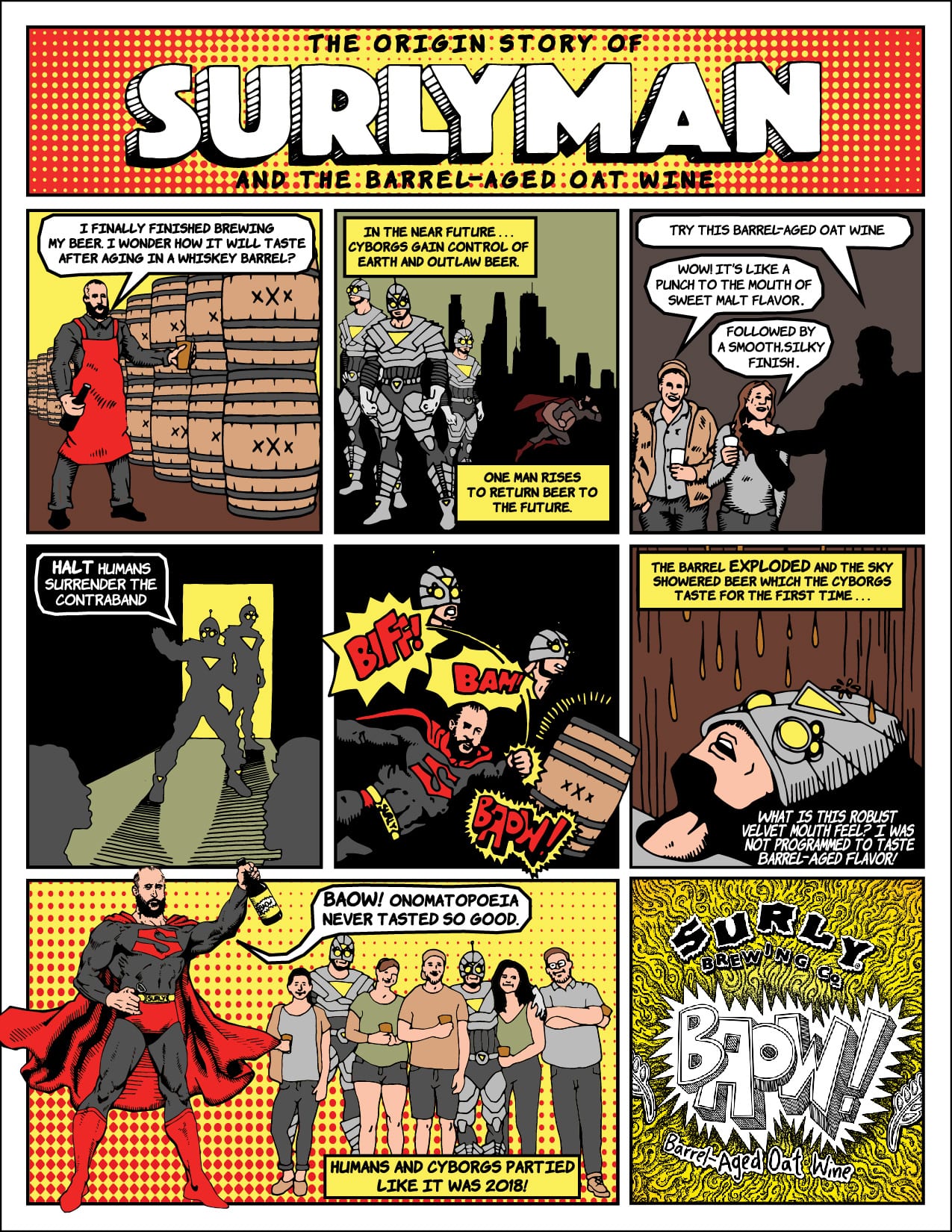